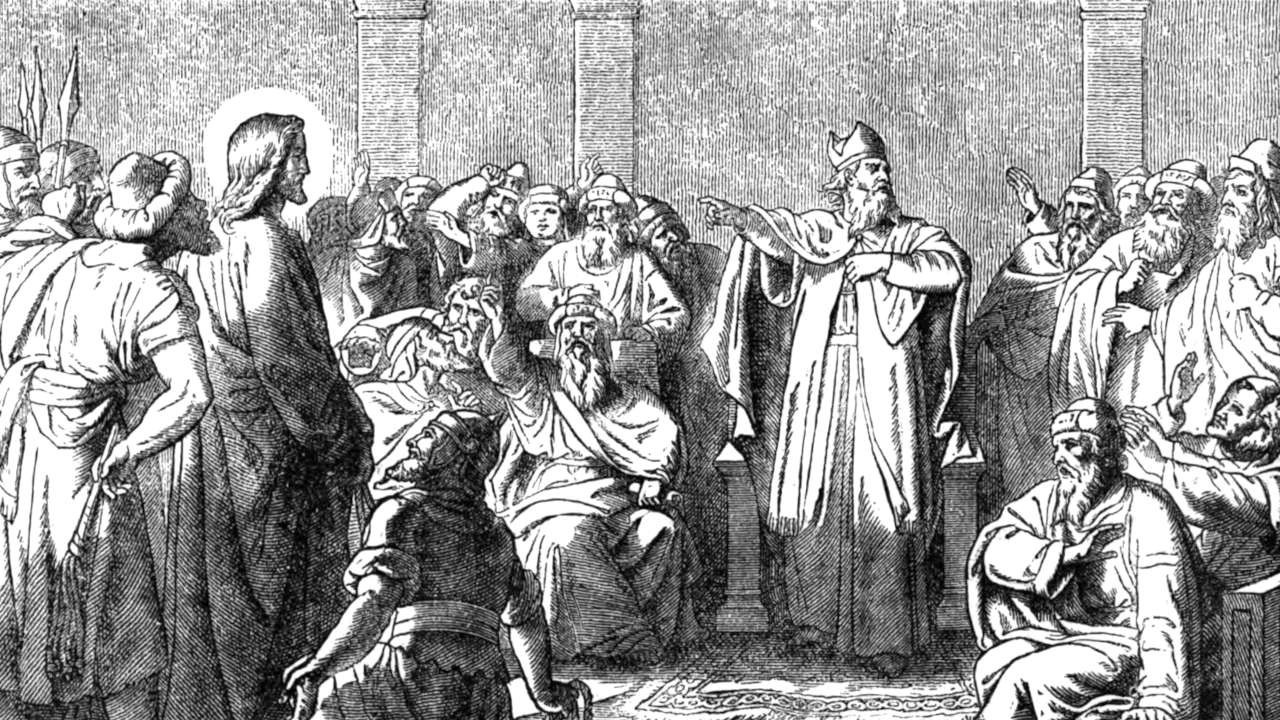 From the cross, Jesus cried out, “Father, forgive them; for they know not what they do.” (Luke 23:34).  Jesus, in His merciful love was pleading for his enemies, the chief priests, the Pharisees, the scribes, the Roman soldiers, and the mob of people mocking him and belittling him.  And he was crying out to intercede for us, us Christians, us Catholics, we His people, who make ourselves His enemy when we sin.

Let’s reflect on what our Lord actually said. He said that “… they know not what they do.”  What does that really mean?  Take a moment, let’s think about it. The people present at the crucifixion were ignorant, at least in some ways, they were disconnected from their behavior.  They were participating in the state-sanctioned and religion-sanctioned murder of the Savior of the world, the One who was Love.  And they thought it was for the best.

St. Thomas Aquinas teaches that we always choose at least a perceived good. Caiaphas, the high priest, criticized his fellow religious leaders by saying: “You know nothing at all. Nor do you understand that it is better for you that one man should die for the people, not that the whole nation should perish.” (John 11:50).  And Caiaphas believed that it was best that Jesus die in order to avoid conflict with the Romans – he wasn’t only justifying his malice toward Jesus or prophesying what Jesus would actually do.

I see Caiaphas as preoccupied with righteousness, with the preservation of Israel as an occupied nation (and the preservation of his own status within it), and thus he took the “better” course, according to his distorted understanding of the Law.  He did not understand that Jesus was the Messiah, the savior of Israel and the world -- his intellect was not enlightened.  Because Caiaphas’ heart was closed to the Gospel, the light and warmth of grace could not enter into him.

In summary, sin divides people, making them enemies of each other because sin is the direct opposite of loving God and loving your neighbor.  And sin divides us within ourselves, fragmenting us, disconnecting us inside, leading to a darkening of the intellect and to ignorance.

The dark ignorance of a mind unaided by grace…

St. Paul admonishes us in Romans 12:2 -- “Do not be conformed to this world but be transformed by the renewal of your mind, that you may prove what is the will of God, what is good and acceptable and perfect.”  Our minds need to be renewed by the Gospel, by our Lord Himself.

Caiaphas was not transformed by the renewal of his mind, and thus he did not love our Lord as the two Great Commandments demanded.  He remained ignorant and instead of offering what as good and acceptable and perfect, he offered what was evil, unacceptable and distorted, and he sank deeper into internal disharmony and fragmentation because of his sin.

And this lasts until those clients have corrective relational and emotional experiences of real intimacy with a father – either with another man as a father figure or with God as Father. Time alone doesn't heal these wounds.

“Grace perfects nature,” St. Thomas tells us. Grace needs our human natures to perfect.  Sin blinds us to the true nature of ourselves as beloved sons and daughters of God and warps our perceptions of who God really is, and what our relationship should be with Him.

And harm comes from such ignorance…

So much harm comes from ignorance.  And ignorance is one result of a lack of interior integration.  Caiaphas did not understand who Jesus was.  Therefore, Caiaphas didn’t understand who he himself was, a beloved son of God.  He didn’t understand what a right relationship with Jesus would look like.  Caiaphas was disconnected from reality inside.  He was not integrated and out of his fear (and possibly other motives, such as jealousy), he focused on self-protection.  His warped reasoning and his fear of the crowd’s initial celebration of Jesus and the potential Roman reaction of suppression led him to cling to the idea that his positive end (preserving the Jewish people) justified his terrible means (the execution of Jesus as an alleged threat to the Pax Romana).  In so doing, Caiaphas made Jesus his enemy and turned away from Him.

The Mission of Souls and Hearts

The Interior Integration for Catholics podcast is in the middle of a series of episodes that constitute a deep dive into the questions “What is mental health?” and “What is psychological well-being?”  The most recent episode, number 92 is entitled Understanding and Healing your Mind through IPNB.

In this episode, I invite you to explore and understand with me neuropsychiatrist Dr. Dan Siegel's Interpersonal Neurobiology (IPNB) and what IPNB can show us about psychological health.  We review the triangle of well-being, the nature of secure attachments, and the basis for mental health from an IPNB perspective.

We examine the characteristics of a healthy mind and how it functions, and the two signs that reliable indicate all psychological symptoms and mental dysfunction.  We discuss the nine domains of integration, mindsight, and the healthy mind platter, and I share my exchange with Dr. Siegel about whether and how IPNB can be integrated with Catholicism.  Check out this engaging 80-minute episode here.

The Litanies of the Heart

Given Caiaphas’ learning, his spiritual formation, his knowledge of the Scriptures and his extensive grasp of Jewish tradition, one could argue he was in a better position than most to recognize Jesus as the Messiah.  But in its fear and jealousy, Caiaphas’ heart was closed and hardened to who Jesus actually was, and so his mind was darkened and he became disconnected from who he was and who Jesus was.

The same thing happens to us when we turn away from Jesus.  All of us experience (at least at times) our hearts being closed, fearful and wounded, and we draw away from our Lord instead of approaching Jesus as our Healer.

I want you to see what really strikes chords in you in those prayers, and to let me know what you experience – email me at [email protected] and let me know what praying them was like for you, or leave a message on our discussion board on the landing page.

And keep me in your prayers, as you are in mine, as we approach Holy Week!