Catholic Being vs. Catholic Doing 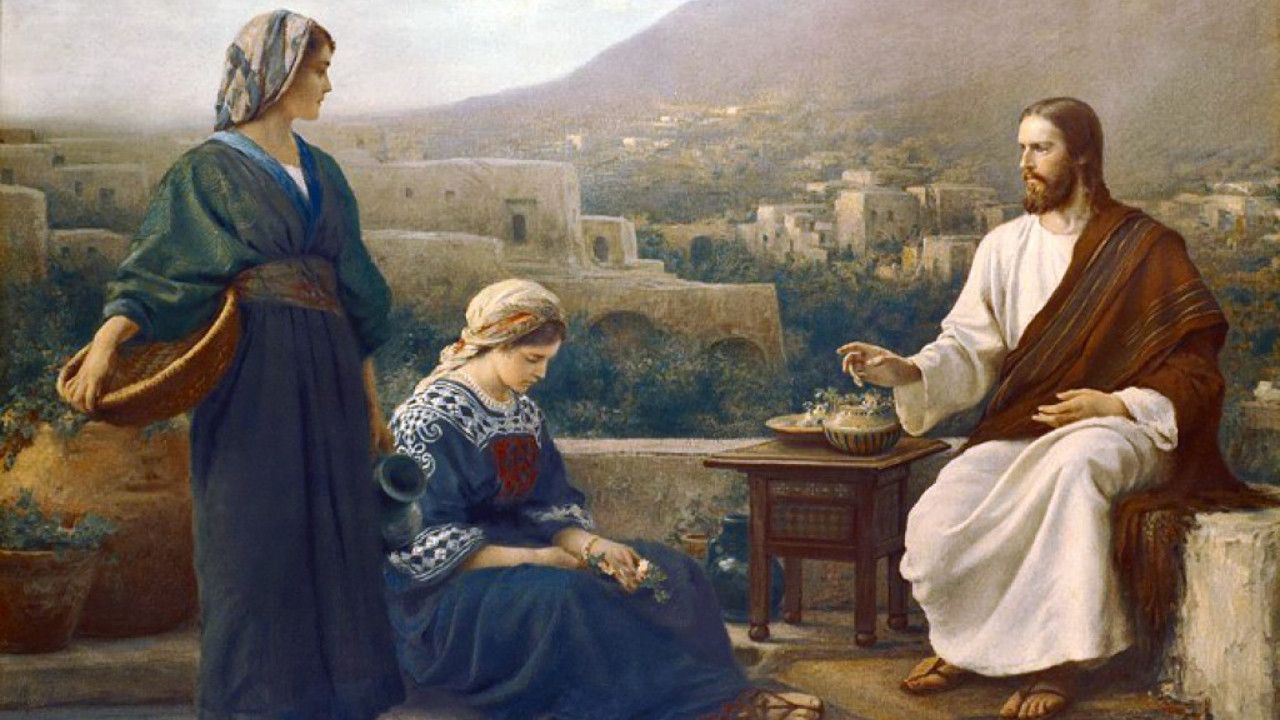 Many of you may be exhausted in the aftermath of all the “doing” in preparation for Christmas Day. The annual marathon of planning, scheduling, shopping, decorating, wrapping gifts, baking cookies, preparing food and drink, facilitating family traditions, visiting relatives and friends, traveling, dealing with the excitement and fatigue of small children, the list goes on and on. Extreme weather in many parts of the US this month increased the level of difficulty and unpredictability of the 2022 Christmas season.

So much to do, so little time. All efforts are an attempt to make the season, if not “perfect” a la Martha Stewart, then at least “good enough.”

It can all lead to exhaustion.

And in all the “doing” we can easily lose track of what is much more important. And that is: Being.

When I have said such things before, I have received cynical, skeptical reactions, along the lines of – “Ah yes, Dr. Peter, here you go again, you with your ‘Yoda-speak’ about being: Don’t do, just be. You need to get real, man. I need to get things done because people depend on me. Just “being” isn’t going to pay the bills, it’s not going to get supper on the table or the clothes washed or the kids back from basketball practice.”

Let me be clear: there is an important role for doing -- but in the right context. The primacy rests with the being, not the doing.

Let us start with the end, with what we are called to as Catholics, as Christians:

The saints in heaven experience beatific vision. This is what we as Catholics should aspire to in our earthly lives.

The intuitive knowledge of God which produces heavenly beatitude. As defined by the Church, the souls of the just "see the divine essence by an intuitive vision and face to face, so that the divine essence is known immediately, showing itself plainly, clearly and openly, and not immediately through any creature" (Denzinger 1000-2). Moreover, the souls of the saints "clearly behold God, one and triune, as He is" (Denzinger 1304-6). It is called vision in the mind by analogy with bodily sight, which is the most comprehensive of human sense faculties; it is called beatific because it produces happiness in the will and the whole being.

The important thing to note is that beatific vision is a state of being, -- all of our self is present, every bit of us, in relationship with God. In beatific vision we are with God, as we are, as He is, in our entire beings, face to face.

There is not a lot of “doing” in that.

During our lifetime sojourning on Earth, we Catholics are preparing to be with God in beatific vision. Thus, it follows that our being the right way is important and precedes our doing.

How God defines Himself

God defines himself primarily in terms of being and identity, who He is -- not what He does. Examples include:

Jesus became a little baby in the womb of our Mother Mary – the central meaning of his incarnation and birth surrounds His identity and His proximity. Jesus is Emmanuel, “God with us.” His name derived from the Greek interpretation of two Hebrew words: Immanu “with us” and El “God.”

He is not named “God doing something” but rather, “God [being] with us.”

God’s self-definition in terms of being rather than doing is paramount for us, as we are made in His image and likeness.

Yes, God does do things, but His doing flows from His being. In The Sayings of Light and Love, St. John of the Cross wrote “God spoke one word.”

How God defines us

Scripture abounds with examples of how God defines us, His people, and these primarily turn on who we are, rather than what we do. Examples include:

And even with our limited vision, we recognize our identity in some ways – for example, we refer to ourselves as human beings, not human doings.

Our identity as children and friends of God, members of His household

Simon Sinek, in his modern classic Start with Why: How Great Leaders Inspire Everyone to Take Action emphasizes that when we forget or lose track of the “Why” of our being -- our identity – then we are pulled to focus on what we do, and then we lose our way. Sinek suggests that how we live our mission and the specific things we do should flow from our Why – our mission, our purpose. For Christians, I argue that the flow should come from our identity as beloved little daughters and sons of God.

Here is the main point of this reflection:

You first need to be a little child of God, embrace your identity as a beloved little son or daughter of God the Father and Mary your Mother and your doing should flow from your being.

Check out the weekly reflections from August 3, 2022 titled Who’s Your Daddy? Confusion Over Our Primary Parents and from September 28, 2022 Of Mirrors and Identity: The Hardest Question for much more on our identity as beloved little sons and daughters of God, the Why of our being.

To clarify the concept of “doing flowing from being,” I invite you to imagine two little boys, each three years old, each with his natural mother. One mother is a good mother – her motherhood is deeply a part of her identity, and what she does for her son flows from that being. The other mother does the things a good mother should, but her motherhood is not at the core of her identity. Thus, her acts of mothering do not flow from her being.

To an external observer, the acts of both mothers on any given Tuesday might look similar. But is there any doubt as to which three-year-old is receiving better mothering?

All Jesus’ doing flowed from His Being – His identity as true God and true Man.

Jesus’ instruction to us

In the two great commandments, Our Lord prioritizes loving God with our whole heart and loving our neighbor as ourselves (cf. Luke 10:27). He is emphasizing the love relationship – the being with us, and charity infusing our entire being. Our response to His commands that involve doing (e.g. those in the Sermon on the Mount) should flow from our position of love – of being with our Lord, our neighbor and ourselves in a loving way.

Mark the Evangelist emphasized the “being with” before the “doing” of preaching when relating how Jesus called his original disciples out of their occupations: “And he appointed twelve, to be with him, and to be sent out to preach.” (Mark 3:14, emphasis added).

Jesus wants all of us, every one of His disciples to be with Him, to abide in Him. He tells us, “Abide in me, and I in you. As the branch cannot bear fruit of itself, except it abide in the vine; no more can ye, except ye abide in me.” (John 15:4, emphasis added).

And of course, there’s the Gospel story of Martha and Mary in the home of Lazarus (you knew that one was coming):

Now as they went on their way, he entered a village; and a woman named Martha received him into her house. And she had a sister called Mary, who sat at the Lord’s feet and listened to his teaching. But Martha was distracted with much serving; and she went to him and said, “Lord, do you not care that my sister has left me to serve alone? Tell her then to help me.” But the Lord answered her, “Martha, Martha, you are anxious and troubled about many things; one thing is needful. Mary has chosen the good portion, which shall not be taken away from her.” (Luke 10:38-42)

Mary was abiding in Jesus, sitting with Him, being with Him. Martha was caught up in the doing. She had lost track of her identity, her doing was not flowing from the core of her being.

The 1983 Code of Canon Law, in the section of the formation of religious, Canon 663 §1 reads: The first and foremost duty of all religious is to be the contemplation of divine things and assiduous union with God in prayer.

Note that no exception is granted for “active” religious – their first and foremost duty is to “be with” God in contemplative union, that is far from the exclusive purview of the contemplative nuns and monks. The doing of active religious and the lay faithful should also flow from their “being with” God in union or that doing will inevitably lose its Why. No exceptions for a focus on social justice or environmental activism or the remediation of world poverty, or hunger relief in drought-stricken nations or world peace or all the responsibilities of married and family life. All those worthy efforts must start with being with God, in prayer and the Eucharist, lest they lose their “Why” and collapse into secular do-goodism.

In summary, there need be no tension between doing and being for a Catholic. There is an order of precedence – the doing flows from the being. You first seek to be a little child of God, embracing your identity as a beloved little son or daughter of God the Father and Mary your Mother and then your actions flow from that secure identity, as a response to the love of God and Mary. In future weekly reflections, we will dive much deeper into practical recommendations on how to pursue this.

Three days left to apply for the RCC

In the Resilient Catholics Community, we focus on the “being” and the “being with” first. Being with God, being with others, yes, but also you being with yourself. Because our Lord commands us to love ourselves (cf: Luke 10:27), that means we must have a relationship with ourselves. God relates within Himself in loving union among the three Person in His unity as one God, analogously, we have a multiplicity within our unity. That’s Why I Reject the Concept of “Personality.”

In the RCC, we focus on the Why. The RCC came into being for two primary reasons:

We accomplish this by working on our human foundations in a structured, deliberate, step-by-step way, through a whole year, drawing from the best human formation and psychological resources I have found in my 21-year career as a Catholic psychologist.

Find out more at our RCC landing page. Catch the 69-minute information video or listen to the audio here. If the RCC seems like it might fit you, work through the 19-minute experiential exercise designed to help you decide about whether to apply.

If you are ready, apply here to start the process of discernment about joining scores of other Catholics in the RCC on our pilgrimage to well-being, shoring up our natural foundations for the spiritual life.

If you still have questions about whether the RCC is a fit for you, call or text me at 317.567.9594 or email me at [email protected]. RCC Registration for this cohort is open until December 31 and then will close until reopening in June 2023 for the next cohort.

In Christ and His Mother,

P.S. For those of you with some familiarity with Internal Family Systems, you can think of your innermost self as focused on first on being, with the doing then flowing from the being. In contrast, manager parts, often motivated by fear, focus first on doing, with their agendas that are engineered to bring about certain outcomes.

P.P.S. Get ready for episode 104 of Interior Integration for Catholics, an experiential exercise to help you explore and understand your anger at God. It will be recorded live on Friday, January 13, 2023 from 2:00 PM to 3:00 PM Eastern Time. Register for that experience on Zoom with this link.